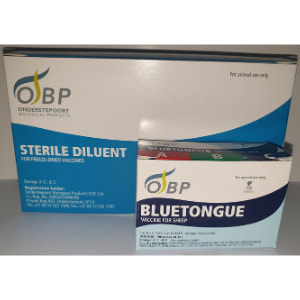 The vaccine is presented as a series of three separate injections with different serotypes of bluetongue virus in each bottle. The bottles are marked A, B, and C and must be injected in the following sequence: A, first, B, three weeks later, and the bottle marked C three weeks after B. If necessary, this interval can be longer but never shorter than three weeks. It is necessary to inject the full series, A, B and C in order to get the widest possible protection.

The vaccine will only stimulate immunity to all serotypes after a number of inoculations. Additional measures must necessarily be taken to ensure the protection of sheep against bluetongue during the time of the year when the risk of transmission of infection by biting insects is greatest. Animals should be kept away from low-lying areas in vleis and next to rivers, dams, and pans and valuable animals should be stabled during the late afternoon, night, and early morning.

WARNINGS: Do not slaughter animals for human consumption within 7 days of vaccination. Vaccinate healthy animals only. Keep out of reach of children, uninformed persons, and animals. Although this product has been extensively tested under a large variety of conditions, failure thereof may ensue as a result of a wide range of reasons. If this is suspected, seek veterinary advice and notify the registration holder.

DIRECTIONS FOR USE: Use only as directed.

DOSAGE: 1 ml subcutaneously. Inject the vaccine behind the shoulder or on the inside of the thigh but not under the tail.

EFFECTS OF THE VACCINE: A fever reaction may follow from the seventh day after vaccination. Such animals must not be exposed to strong sunlight, adverse weather conditions, and fatigue. Reasonable protection against most of the virus types is usually achieved within 3 – 4 weeks after the last injection but cannot be guaranteed in all animals.